You are here: Home » Community Outreach

BLA LEC does its’ part for #67minutes, in youthful cheer.

All of South Africa on the 18th of July got together to partake in their 67minutes of goodwill, in commemoration of the late Nelson Mandela. The whole country came together in unison, definitely embracing the ideals of a ‘progressive nation’.

BLA LEC of course too played their role on this great day. They invited a handful of the kids from the Ikhaya Lethemba home, situated in Braamfontein Jhb, along with their caregivers, to come spend a portion of the day at the BLA offices. BLA LEC’s program consisted of an address by one of its directors’, Andisiwe Segonyela which was inspiring and succinct, so as to give the spotlight on the stars of the day, the kids.

Shortly after directors’ address, the kids were given a platform to speak and entertain us in their various ways. They were all asked what they would like do when they grow up, we had some pretty diverse responses. From business women (a bright-eyed bubbly 7year old), to an aspirant model, lawyer, police officer and many more. The old adage was definitely right in saying, “I believe the children are the future, teach them well…” This was followed by a tour by the BLA LEC team, of the offices. We marched on.

The kids were given walk-ins and picture opportunities in the offices, we started of leg of tour in reception area, moving on to Commercial Law office, to Project Co-Ordinator CLE office, moving on to meeting room and the kid’s second fave’ room, the kitchen. We were welcomed by delicious aromas, which was clearly an indication of yummy things to come. Tour was completed with walk in and showing of boardroom. The kids thoroughly enjoyed this and were engaging with BLA LEC team.

This was followed by a, delicious meal prepared by the BLA LEC cooks, which was opened up with a touching prayer by the Ikhaya Lethemba kids.

The program of the day ended with a segment of singing and dancing, by the kids, an illustration of their talents. We pretty much had a stage laid out, with the world’s best performers. A chance availed itself to converse with some of the kids, it was also interesting to note that, not only does Ikhaya Lethemba temporarily house children, they also give refuge to their parent/guardian(s) too. We spoke to a Mam’ Queenrose who has been at the home for 8 years, she started out as a volunteer and cites her passion, love and devotion to kids as being the main reason for staying at the home, and rising up its’ ranks.

The spirit and purports of the event as highlighted by Andisiwe, were to remind the kids of the importance of dreaming, and the endless possibilities that lie out there for them. Which essentially ties in with the core values of BLA LEC, to promote and invest in learning. 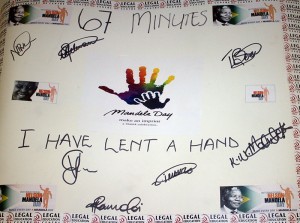